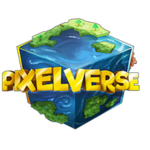 ​
Hello,
I am RocketTheOG, the community manager of Pixelverse. I've been working with Pixelverse for about two years now which is also about how long the server has been around. I started as a helper and worked my way up through many hours of dedication. You don't need to know much more than that about me so I will just be moving on from this part of the thread pretty quickly.

What we are and what we aim to be:
We are a currently a vanilla (unmodded) Pokemon Minecraft server that has been running for just about two years. We have a very active and dedicated community, peaking at seventy players online during the weekend. We are currently on season one, season one is nearly complete with only two gyms and a one other large content release coming before the season comes to an end. After season one, we plan on season two being in Hytale. We will port all of our code and builds into Hytale and start development of season two there. Right now, we are looking to expand the team in all directions. Whether you are interested in helping with the Minecraft aspect, the Hytale aspect, or both - we want you!

We need:
Modelers - We will have to recreate the Pokemon from our MC server and make them into Hytale style. Gen 1 and 2 Pokemon will need to be retextured since their models are already done.
Builders - terrain, building, interiors, etc...
Writers - write lore for quests, side-quests, write NPC dialogue.
Helpers - if you would like to be a helper you need two weeks in-game experience to apply.
Editor - if you can make cool videos / edits to showcase our server, you are wanted!
Config and devs - very select few will be considered for this.
Command Blockers - puzzles, cut-scenes, etc...
Wiki writers - also must have extensive knowledge of the game in order to fulfill this position.
If you have any other skills that you can bring to the table, please contact me.

Check us out!:
Want to see pics of the server? Want to play the server?
Twitter: https://twitter.com/PlayPixelverse
Discord: https://discord.gg/b7kSud3
Imgur Gallery: