Hi! At the end of November, we published our first progress update - a smaller round-up of recent development work that included new biomes, farming, and some new creatures. In this post, we're going to give you a glimpse at some of the progress that we've made since, including exciting changes to the scope and structure of adventure mode. We hope that these updates will become a regular way that we communicate, and we're excited to reveal more of what we've been working on.
First off, however, we want to say thank you again to the Hytale community. Your understanding response to our most recent development update has meant a lot to all of us, and your excitement about our first gameplay clip (glimpsed at the end of the graphics update post) was great to see. It can be really nerve-wracking to reveal parts of the game before they're done, but your response has given us confidence that this new approach is the right one. However, please do continue to bear in mind that everything we're showing in these posts is work in progress and subject to change.

This week marks one year since the announcement of Hytale. The journey we've been on since has been exciting, challenging, even life-changing - and we owe all of that to the community. Whether you watched the trailer, posted about us, made a video or sent us your fan art, your enthusiasm has given us the chance to become better developers and to raise the bar for a project that we're deeply passionate about.

Now, on with the progress update - starting with a closer look at one particular part of that gameplay clip.


In case you missed it, here's the gameplay clip that we first published in the graphics update post. Many of you noted the kill count that appeared in the top right of the screen after the combat encounter began. This is a basic example of Hytale's objective system, which plays an important role in your journey through adventure mode.
The objective system allows us to set specific goals for the player when certain conditions are met. As a basic example, an objective may be established when the player enters a particular location, such as the ruins in the gameplay clip. Encounter prefabs like this feature hand-designed architecture and gameplay scenarios, structured challenges that complement the freeform exploration that you'll otherwise be engaged in. 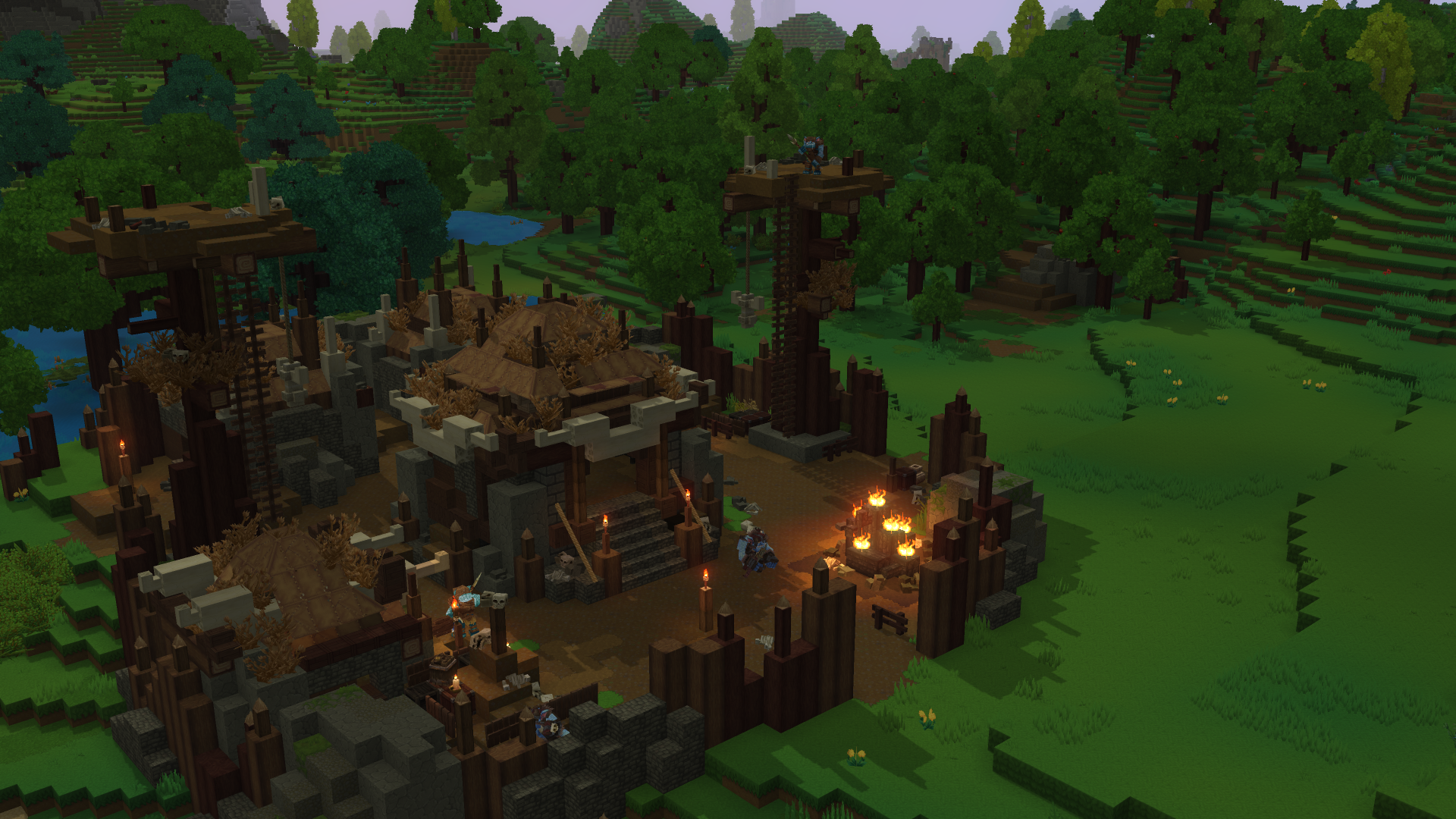 In other cases, location-based objectives may be attached to points of interest that have a random element, such as the Trork camp above. In this case, the exact roster of enemies that you'll face will vary, but the objective system will still provide you with a sense of what you need to do to succeed. For more on how prefabs are built and incorporated into our worldgen systems, check out this blog post from earlier in the year.

Sometimes, an objective might be tied to an item - like a treasure map or a bounty note that sends you off in pursuit of a specific foe. Objectives can be one-off missions, or they can form chains that require you to succeed at multiple stages of a challenge before receiving your reward. We'll go into more detail about the kinds of rewards that objectives will provide in adventure mode in the future, but loot and faction reputation are both likely reasons for you to seek out these special tasks. 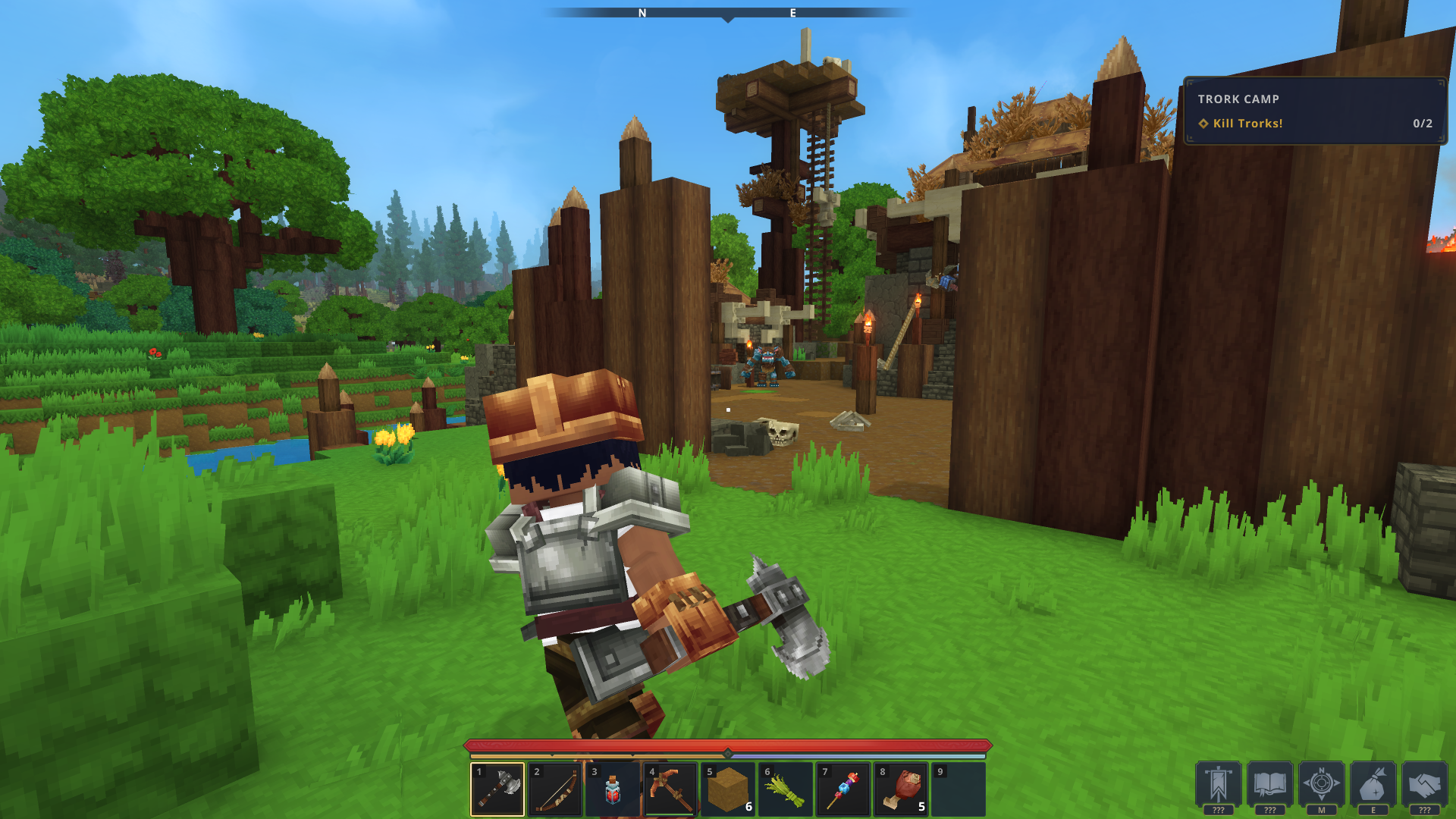 As with many parts of Hytale, our goal is for this system to be fully extensible. Server operators will be able to use it to structure their own challenges, and the system is fully compatible with cooperative play - location-based objectives can be joined by any player who happens to be in the right area! 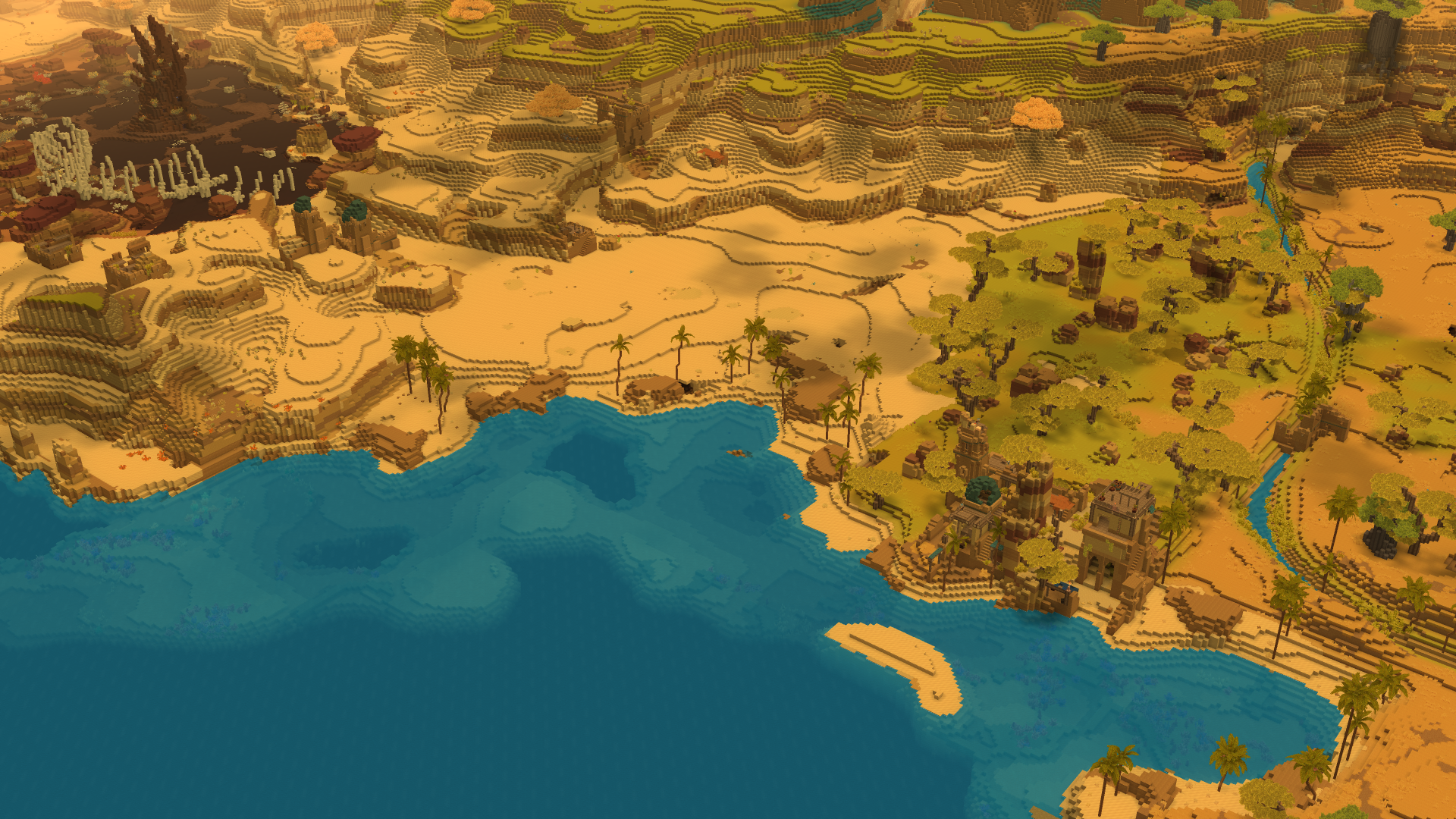 Over the last few weeks, we've started testing a series of changes to adventure mode's structure. In the past, we conceived of adventure mode as a journey through the zones in sequential order - so by the time you reach zone 3, you'd be more powerful and better equipped than you were when you first set foot in zone 1.

We're rethinking this approach in order to encourage a less linear progression path. Now, the first three zones each contain content at multiple tiers of difficulty, along with appropriately scaling resources and rewards. This means that it's possible for your adventure to start in zone 1, 2 or 3. We haven't settled on whether this will be random, or a matter of player choice, and even the zone names themselves are yet to be finalized. No matter where your journey begins, you'll have the choice of establishing yourself in your starting region, moving to another zone, or even roaming between them.

Whatever you decide, you'll be able to find content appropriate to your power level. In the shot above, you can see a view of zone 2 showing multiple different biomes. You can probably tell which areas are likely to offer a more substantial challenge! 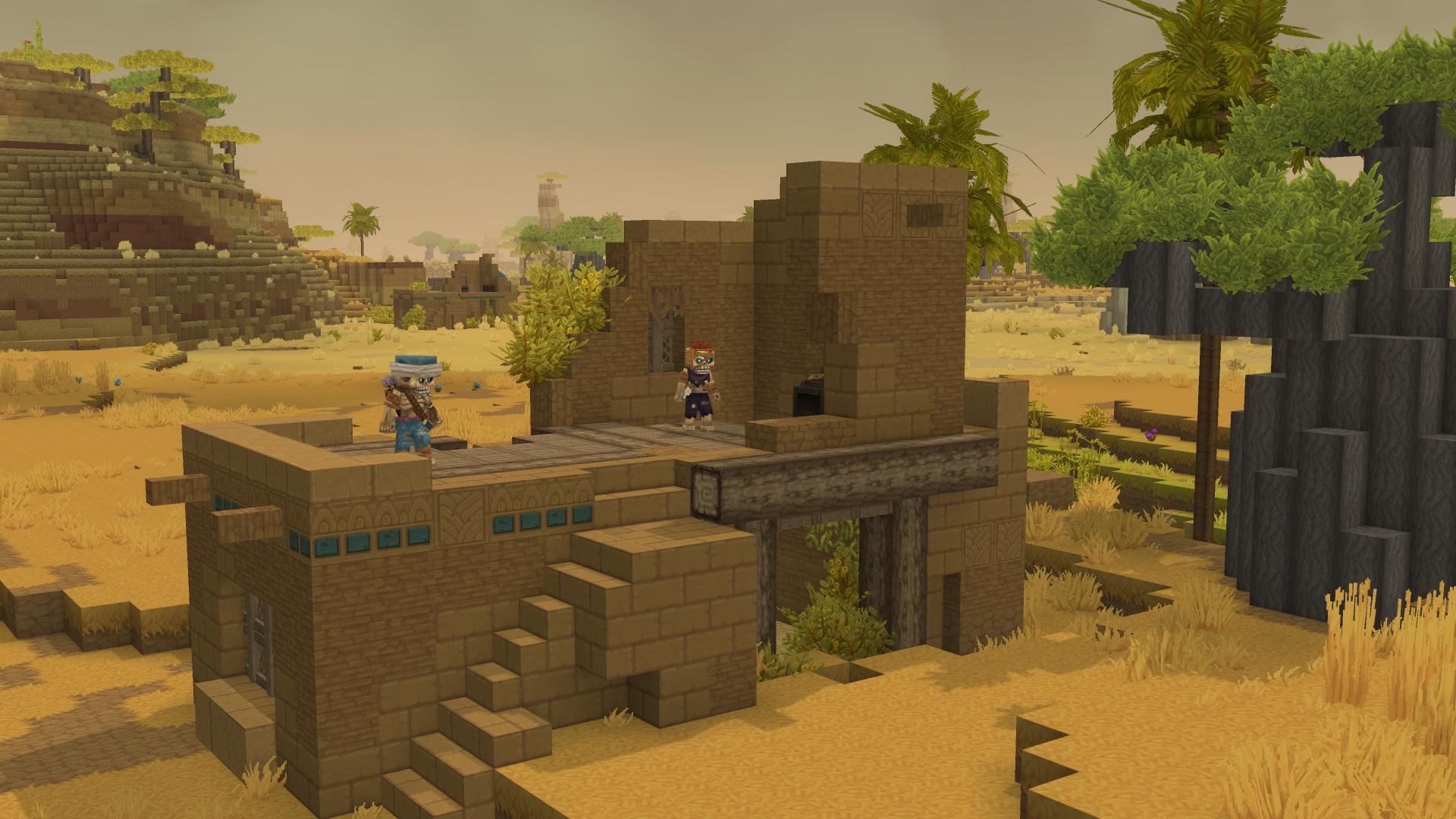 The tier of a particular area affects the types of prefabs you'll find there. Above, you can see a basic ruin in zone 2 - content appropriate for a player just starting out on their journey. 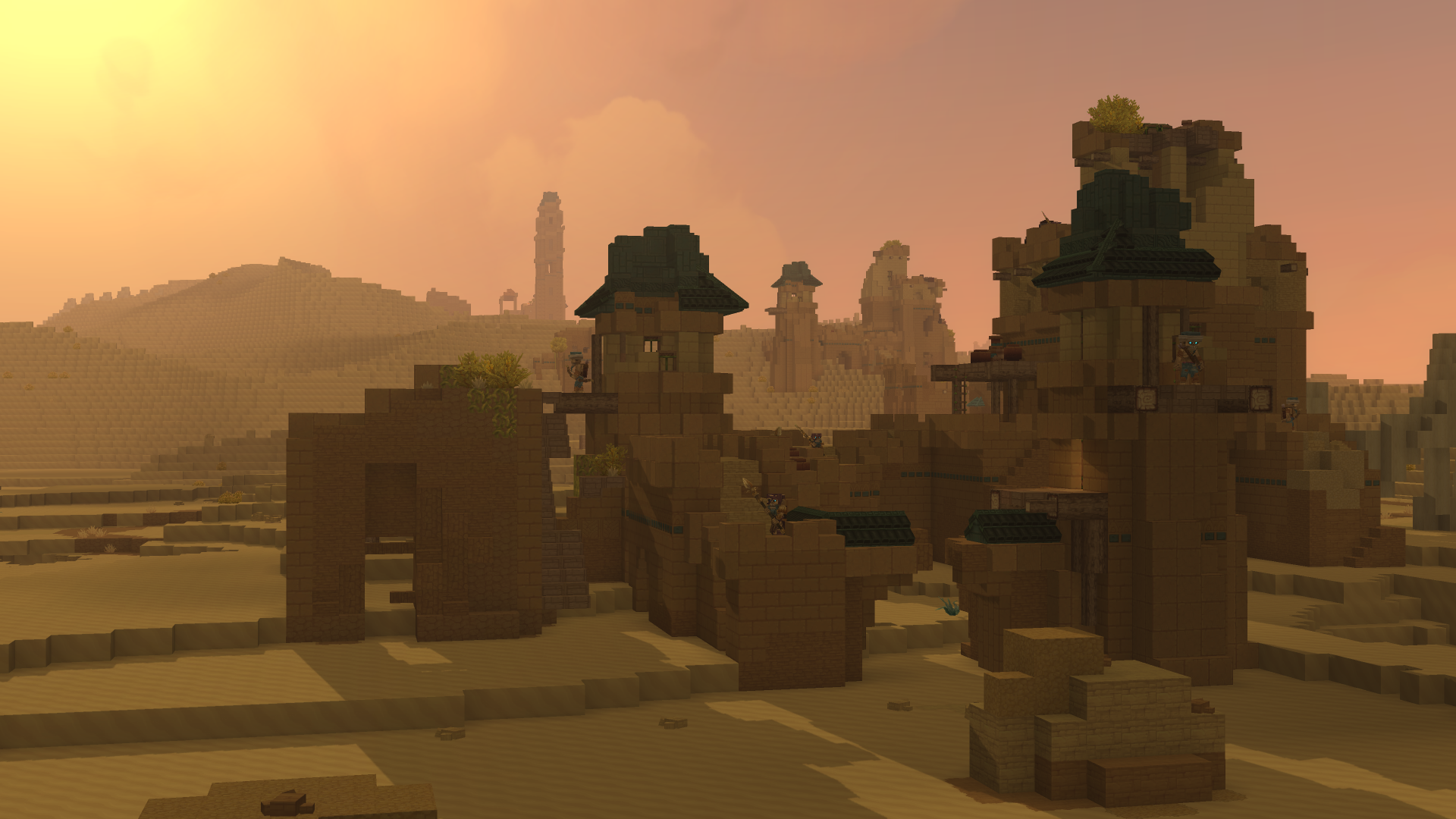 Here's a higher-tier version of the same concept. Players who want to take on the undead occupants of this crumbling fortress will need to be well-prepared!

As encounters increase in complexity, so do the NPCs that inhabit them. While we've previously explored the concept of enemy classes - you can check out an example of Trork subtypes in this blog from last year - we've been working on expanding this with a tier system of its own. Certain powerful enemy types will now only occur in high-tier encounters. Other classes may appear in multiple tiers, but 'level up' as they do so. 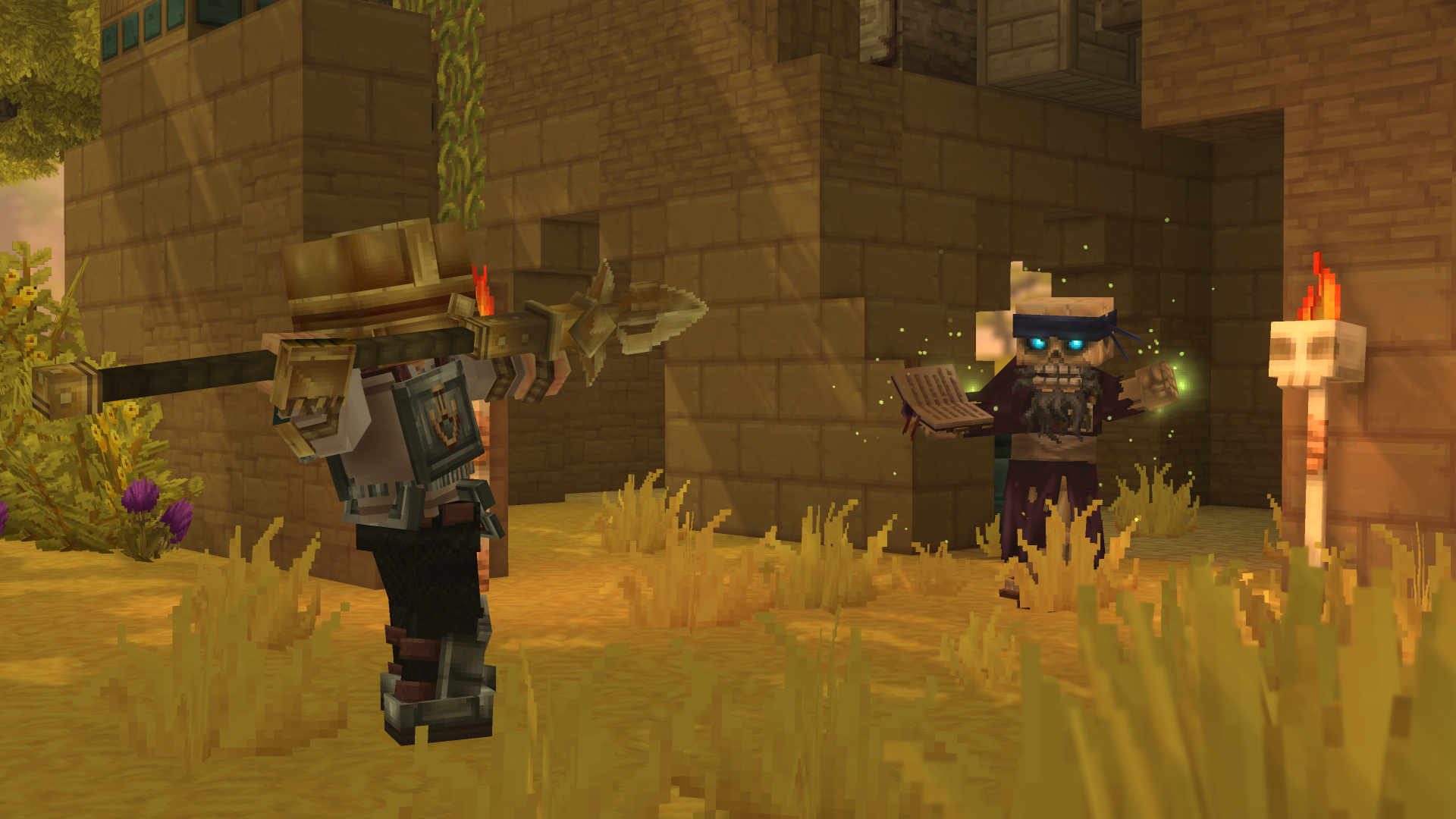 In this screenshot, the player is fighting an undead mage. These are slightly more advanced than your basic skeleton - you won't encounter them at the lowest tier of difficulty - but they're not the deadliest foe you'll encounter, either. 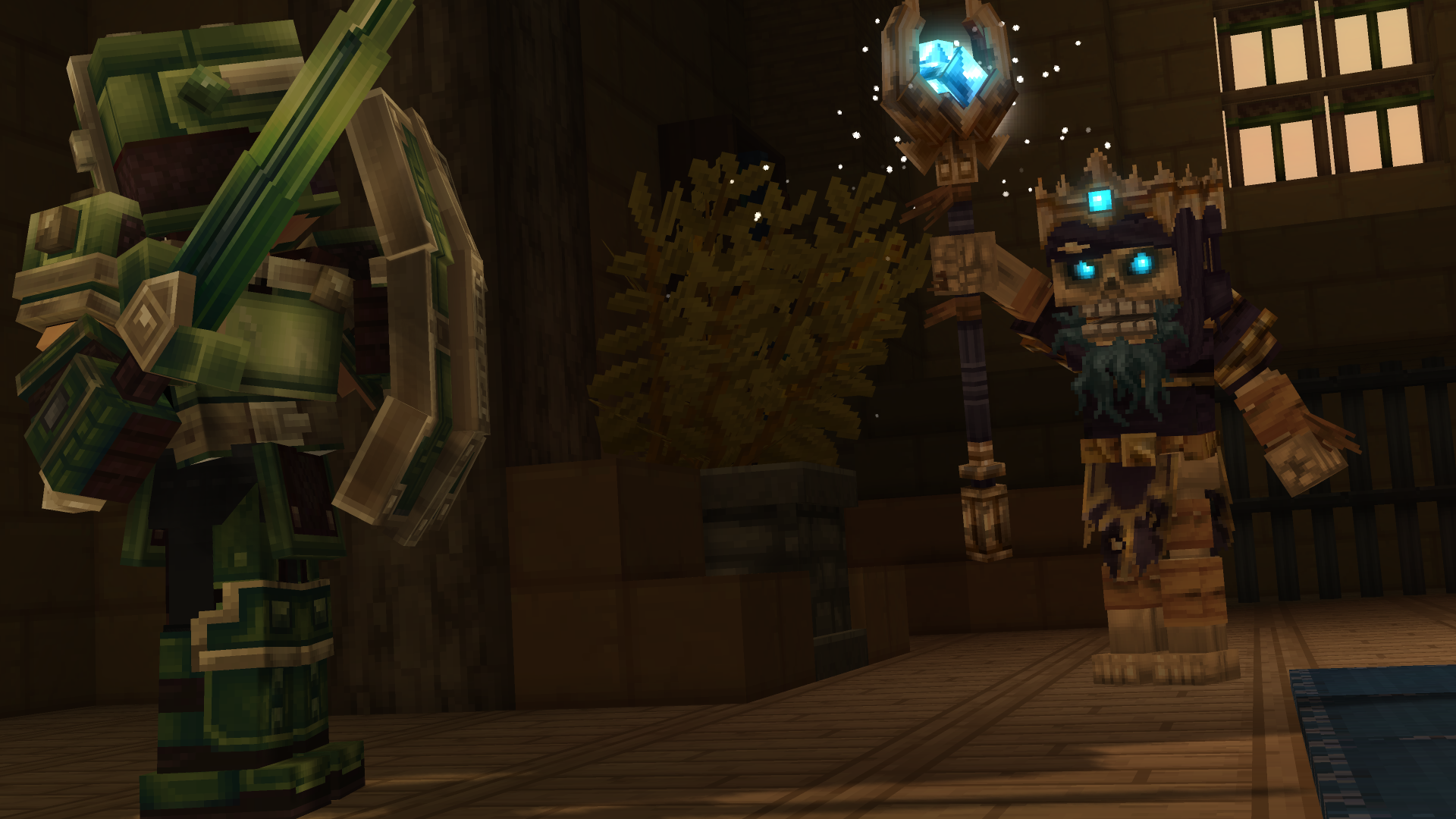 Here's what you may encounter at a higher tier of difficulty - a powerful variant of the same fundamental mage archetype, with a more formidable appearance to match. Luckily, the player in this shot has had some equipment upgrades, too!

These changes are still being tested by the team, but we're excited by the potential for this system to add variety and give players greater choice over the direction that they take at the beginning of their adventure. The next step is to finish implementing similar content updates in zones 1 and 3, which will include new prefabs and NPC types for a variety of factions, including the Trorks and Outlanders - expect to hear more about this in a future progress update! 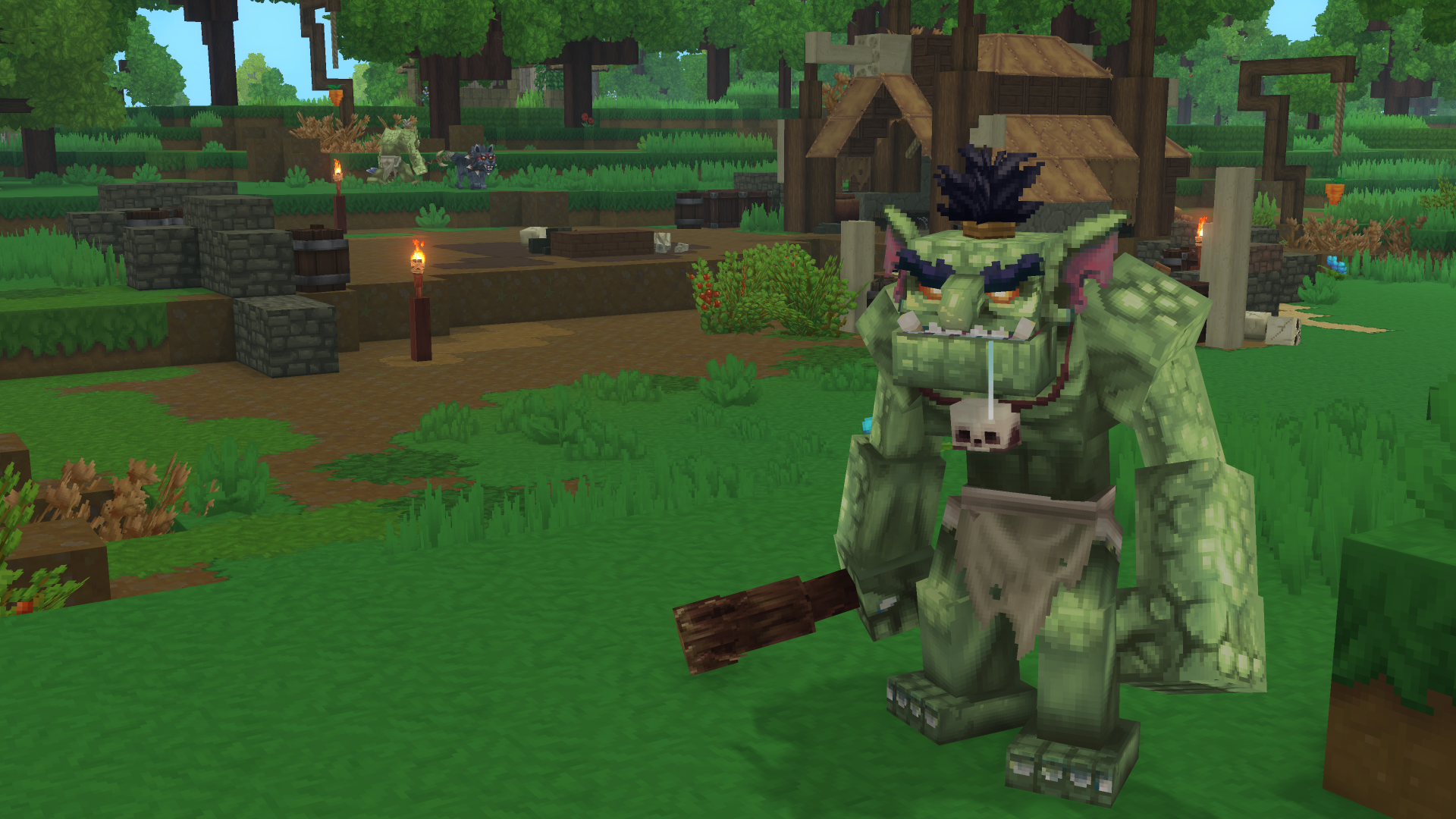 While we’re on the subject of NPCs...

In a distant region of Orbis, a new aquatic menace has emerged - complete with eerie bio-luminescent markings! 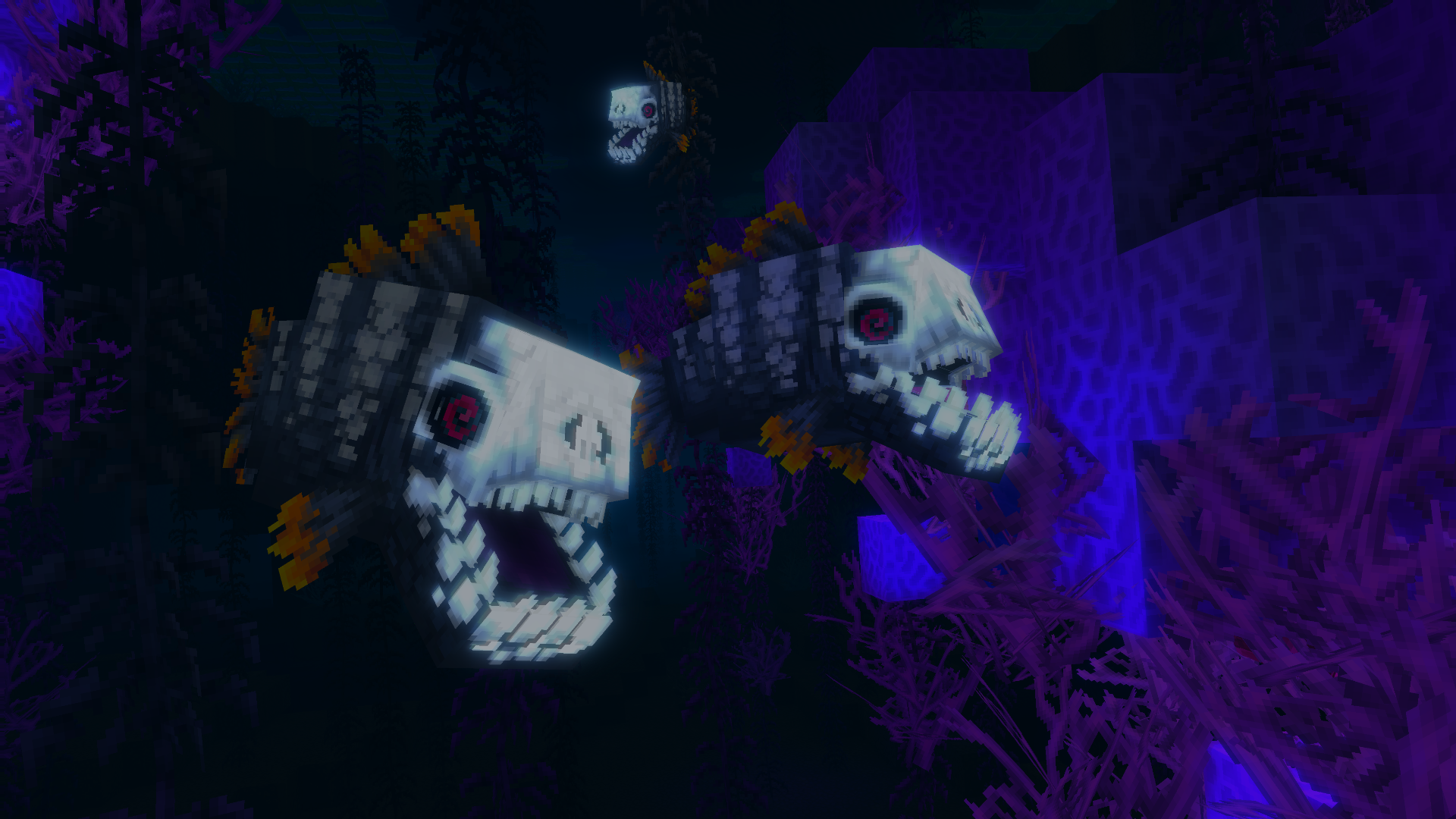 In our last progress update, we showed how the curse of undeath can produce some truly twisted beings. However, not every victim of this malign magic is quite so monstrous. 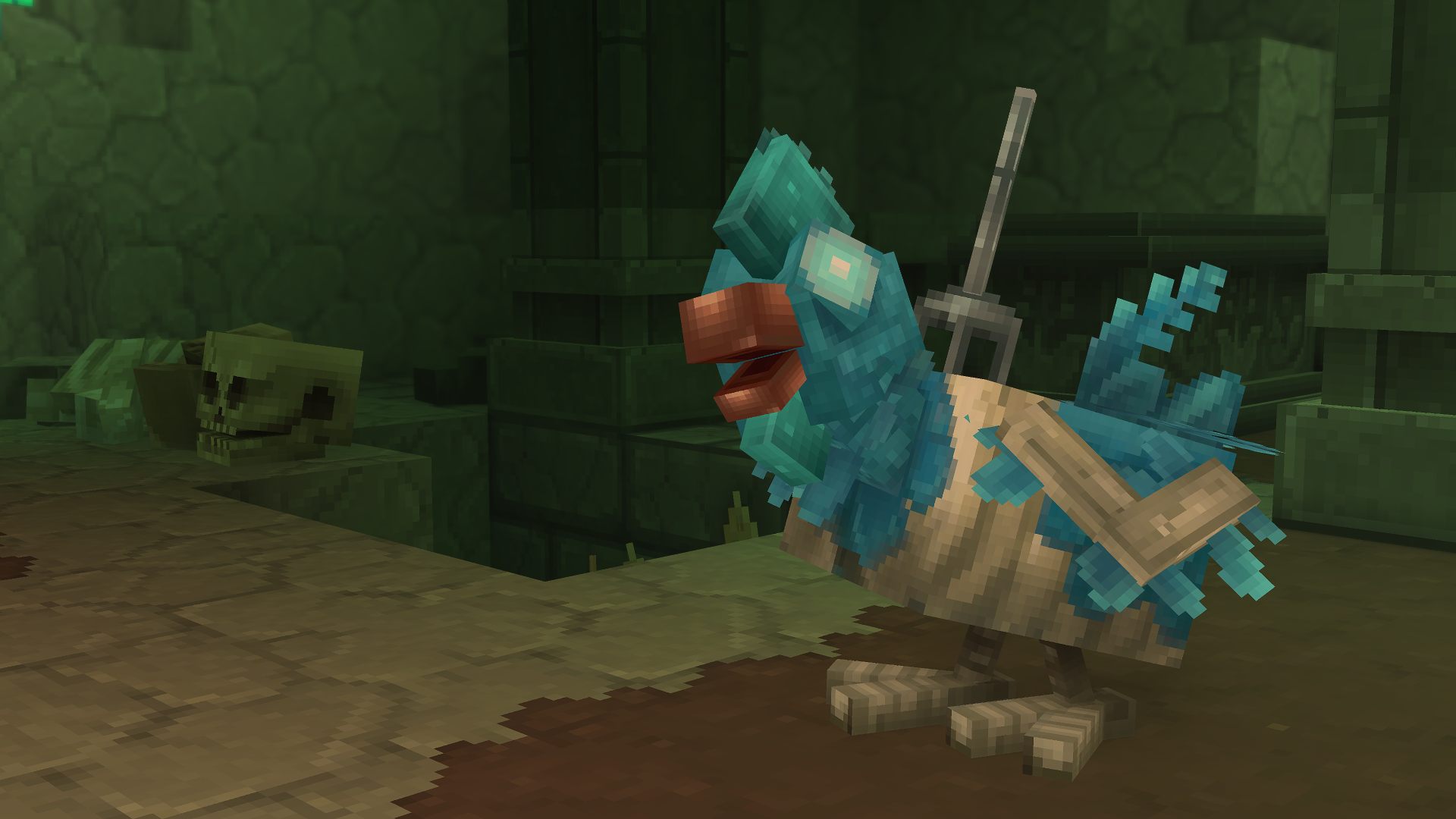 Alas, noble chicken. Even in death, you serve - or are served, as the case may be.

That wraps up this progress update! The team is going to take some time off over the holidays, so you can expect the next post from us in January. Thank you again, and happy holidays from the whole Hytale team!

Very glad that they're following through with being more open about unfinished ideas and details! Also, I'm very pleased that they told us ahead of time that there would be a break from blog posts, I definitely appreciate that!