My Take on the Hytale Logo (Hidden Lore)

Hytale Logo Hidden Lore
People have been talking about the lore hidden in the Hytale
logo. So far I have seen 2 out of the 4 symbols "decoded", the
Gaia symbol and the evil contained symbol.

But there are 2 more symbols, so far no one has metioned them.
The square-ish symbol in the top right and the face like one in
the bottom right.

I belive that the square is a sun, it has rays and is above the ground
like pattern. At the bottom is a face that looks like Varyn, it has wavy
hair and a diamend shape on its forehead (with eyes on eachside).

I think that this carrys the message:

"Gaia contains the evil of Varyn from the sunlight, the surface of Orbis..." 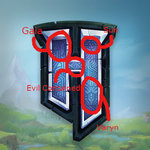