Magestia is going to be a game on Hytale
Initially, it will be a mini game, consisting of 2 teams that will fight to take control over a castle, 1 defending the other attacking
What we learn and add to this minigame (such as catapults and battling rams) will feed into our final goal:
Magestia will be a world where players will group up to control of land
Villages will grow into Towns, Towns into Cities, as Clans will grow in size and wealth
There will be an emphasis on creating towns around land rich in specific materials, so Clans can claim it as their's
However, land will only be rich in a few, if any materials, leading for Clans to either trade or raid to receive other riches
https://discord.gg/2BV8Zf5
https://hytalehub.com/groups/magestia.143 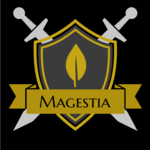