Question How will the transition between zones be handled?

So I was admiring the concept art for the zones, and noticed the lineer transtion between the zones. I know the Hyteam have put loads of effort into blending and creating smooth transitions when the zones meet, but so far nothing on the way the "shape" of thew zones will be made.

If we imagine that to the right of the image above is South, and the left of the image is North, then if we traveled north would we inevitebly transition between the zones?

Or are they spawned like dots on a huge map, the same way minecraft spawns biomes?

If though, when you travel North and you do in fact travel through the zones, what happens if you go South form Zone 1? maybe it just goes the other way?

Because it's been convirmed that each zone will have procedurally generated biomes, it would be very messy and mess up the sense of accomplishment if the zones were just scattered like biomes. I am keen on the idea of starting in an easy safe place, exploring and getting to know the game, before setting off on a massive adventure into the desert, over mighty mountains and through valleys of fire. It would be reminiscent of LOTR, setting off from the Shire and braving the unexplored world ahead. So I theorised that maybe the worlds would be generated a bit more like a target. you start in the centre, pick a direction, and no matter the way you go, you'll eventually fall off the edge of the world into space onto the back of a giant turtle. (Dear Hytale team, please put the Hytale universe on the back of a giant cosmic turtle please and I will send you my kidneys as payment).

Although I am most fond of the disk world style, based on the images I have drawn above, and the very nature of the game being made primarily of 90 degree angles, and also potentially want an even distribution of the zones, then I'd imagine that East and West are procedurally generated ad inifium for every zone. but traveling North or South will take you into new zones.

I think they will have hybrid biomes or rivers in between

red death said:
I think they will have hybrid biomes or rivers in between
Click to expand...
Is this confirmed? Or is it just an idea. Either way that sounds awesome.

Petramoss said:
Is this confirmed? Or is it just an idea. Either way that sounds awesome.
Click to expand...
definitely!

Ok, so in a Hytale FAQ a while ago, the Hytale team responded to several theories of Zone placement. Although they never said exactly what it will be like, they did state that the Circular Disk model would not be used. This debunked several popular Theories such as Kweebec Corner's video on the subject!

I think I understand it a little better... The world will generate a "continent" with large zones and various transitions between them for the, I guess, "story island", then comes the ocen, which could seperate the storay land and the wider-wider-wiiiiidddddeeeerrr infite gen exploration space? Or did I just make up half of that? Reason I say it like that is because "You can think of worldgen in the shape of a traditional world map " and then thinking back to the Alterverse concept art, could perhaps be enough points in that direction that it could be possible?

Moral of the story. I want to make a mod that turns Hytale into Terry Prachetts Disk World, so I need to figure out the boundaries and rules of the world gen system, so I can start brain storming. 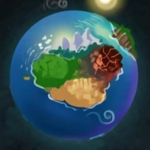