Hello, Oli here. You probably didn't know, but there's something a little bit weird about me. I'm obsessed with Volcanism, and the second I saw the island inside the Hytale trailer, it immediatley got my gears turning and brain wondering, Does this thing erupt? Based on the physics, if it does erupt what will it do? Stuff like that, so today I will be going into analysis to try and decipher what we know about Hytale Volcanism

Volcanism Definition: (For the nubs)


So, based on the definition above, Volcanism is described as volcanic activity or phenomena, I will post some picture examples below: 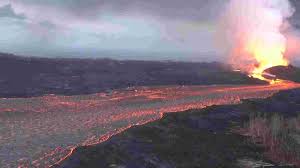 ^ Lava flow occuring in Hawaii, one of the results of a Volcanic Eruption.

Now, you all probably have heard of lava flows, but there is a even darker side to volcanic eruptions, I will show you the dome collapse and the resulting pyroclastic flow of the Unzen Volcanic eruption of 1991


This shows something known as a Pyroclastic flow, these are mammoth flows of hot ash and other debris that can reach up to 800 degrees farenheit and can travel up to 500 miles per hour. This one resulted in the death of 43 people, including reknowned volcanologists and scientists Maurice and Katia Kraft.

Here, we can see what looks to be a volcano show in the Hytale trailer, people seem to have colonized the island so the volcano may be presumed to be dormant.

Now, on the talk of these things erupting, let's take a look at some physics.

So as you can see here, the Yeti seems to be able to throw pieces of rock and land.

I would guess that a volcanic eruption in Hytale would through chunks of land like this with possibly pieces of lava? I honestly don't know how the lava would be pulled off, maybe glowing pieces attached to the rock. As for pyroclastic flows, maybe some sort of dust particles of sorts that cloud the water to be hazy brown? If caught in one it would be a zero visibility area with low chances of surivival due to the erratic, and dangerous nature of pyroclastic flows.

At this time we can only speculate that eruptions will even OCCUR! In Hytale, but I would say we have the best chances of a volcanic eruptions in these 2 alterverses, based on the concept art currently posted on the Hytale website.

These alterverses have the most probability of having volcanic eruptions, that is pretty much all I have for you today folks, as everything else is pure speculation, if you have any better theories, or disagree, would like to correct me on something, or just share your thoughts, please post below! This is my first real thread on this forum, and I hope you enjoyed it!

P.S I will keep everyone updated as I discover new information by replying to this thread!

Good stuff! I would love to see more of your ideas on the science of certain features we already know about in Hytale, and what you'd like to see added to make it more scientifically accurate .

Oli said:
Thanks man! I always found volcanism very interesting, and I try to make my posts as scientifically accurate as possible, I'd love for the in game thing to be scientifically accurate, but I must confess I'd still be happy with some ridiculous explosion of lava!
Click to expand...
Totally! I just like the idea of using science as an excuse to include awesome features into Hytale.

This could be a volcano, but at the same time it could just be a mountain?

If this is a volcano I would imagine it would erupt just because Hytale wan't to give a new experience.